Startseite Allgemein A blessing and a curse

A blessing and a curse

The advent of mp3 was, hands down, a revolution. A gamechanger in portability, exchange-ability. It made it possible for us to buy music online directly and for streaming services to emerge. In my childhood and youth we had to rely on store clerks‘, friends‘ or magazine recommendations. No „you also might like“ pop-ups in the eighties…

I also try to fathom what my childhood and youth would have been like, would I not have had to wait for an album to arrive at my record store („is it there yet?“). Instant gratification vs. exciting anticipation. I digress.

Here is the catch – or curse: Mp3 by design was brought out as a format to utilize the –at the time– limited bandwidth and disk space by using a complex algorithm to discard of supposedly „unnecessary“ data. At the time of mp3’s inception, DSL was hard to come by and most of us were using online connections with -compared to now- ridiculously slow speeds.  To make the best use of what you had, mp3 encoding boils down music data files to about 10% the size of the original wave-file which a CD track is based on.  You read right: 10% of what is used in CD production. 10% of what was the representation of the master tape that musicians and engineers spent countless hours of mixing together.

Admittedly, it is a marvel that mp3 sounds anything like the original at all to begin with. I sure was skeptical when I downloaded and listened to my first mp3 back in the day. Over time, I began to assess the differences between mp3 and CD – and the differences between low bit rate mp3s and such which were made with high bit rate.

Now that broadband connections are here to stay and even mobile networks get better and better, it would be so much better in terms of quality to abandon lossy formats like mp3 and at least move towards the far superior flac format, still allowing for a circa 50% reduction in size. Apparently only bandcamp.com lets you distribute your music in such quality formats. iTunes at least has upped the standard bit rate of their aac-format, with the general problem still in place: aac, too, is a format that loses details during the encoding.

Now, I can vouch for the fact that during a record production dozens if not hundreds of decisions and choices have to be made: Louder here ? More punch or distortion there ? What if we panned that towards the left ? Won’t X be covered up by Y ? Is it punchy enough – or already annoying ? Musicians and engineers alike want to convey emotion and produce exciting sounds.

And then it happens – when you encode a master file to mp3, aac or any other lossy format, you lose a good deal of the details you spent so much time hammering out in the studio. The phrase „will anybody hear these details on his mp3 player“ is surely to be heard in mixing sessions nowadays. If anything, you should want mixing engineers to dig out every last details to make music interesting and compelling – and not to shrug and say: „why bother“. I won’t start here about the ongoing but maybe soon ending „loudness war“. That’s a whole ’nother can of worms…

Recently on „Brain Games“ (NatGeo TV), differences in hearing capability were presented. The audience was given test tones to listen to and my 12 year old step son outdid me (natural fact) to be able to detect freqencies that are already out of my reach. (Just as he -natural fact- surely would be outdone by an infant who still will be able to perceive frequencies even above 20kHz)

Even if I subscribe to Jack Joseph Puig’s credo „the midrange is where the soul of music lives „… Are we ready to quit on the frequencies that represent the sheen and shine of music ?

Do we really want to simulate high frequency perception of a future time just before we need electronic hearing-aids ? Really ? Really really ? I call it dumbing it down.

And it even goes deeper than that. Literally. By reducing the details, mp3 is narrowing the perceived depth of the sound field and is prone to change the timbre of  instruments. All in the name of efficiency….  If you’re interested listen to some examples on Ian Shepherd’s most resourceful blog.

If all of that sounds like opinionated preaching of yours truly, maybe this will convince you: Given the choice in A/B tests, the proverbial target group and music buying generation actually does prefer quality sound ! 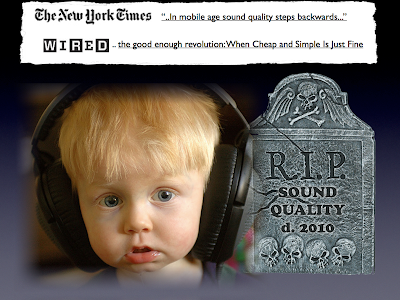 My point being: Please enjoy music ! Enjoy the profound and rich sound of music. Regard the sound quality. Isn’t it fun to explore the details in the sound spectrum ? Also: Spend more than 20 bucks on headphones. Don’t just go for the most boomy ones. It’s nice to let off steam while listening to rock music during a subway commute – but do you think you can hear a lot of details against the 75deziBel of background noise ? (You are likely to turn up to a loudness that is detrimental to your hearing long term).

And -for the artist’s sake- give quality media like .wav and .flac a try. If you like the mp3 => buy the CD. You will be amazed of the sound you’ll discover.

What are your experiences ? How important do you rate sound quality ?